So I got the Victoria’s Secret Annual Swim Sale catalogue in the mail yesterday.

I almost didn’t recognize it on my countertop, and for a brief moment thought to myself, “Man, Sports Illustrated is showing quite a bit of ass on their cover.” 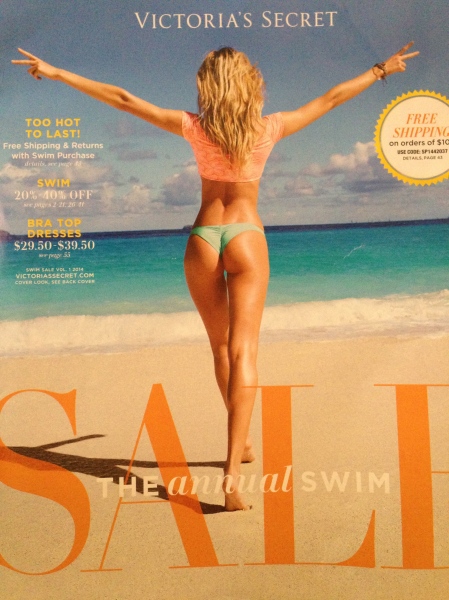 I’m pretty sure this is Richard Nixon from behind.

But no, these ass cheeks that are as plump and dimple-free as a photoshopped picture of ass cheeks weren’t meant for my hubby, but for me!

Now, I’m pretty progressive, and I can certainly appreciate a fine ass on a woman as well as the next straight girl. Or lesbian. Or straight guy. Or gay guy. What throws me off, though, is why the Victoria’s Secret catalogue is so sexual just to try to sell me bathing suits. I don’t need it to be sexual…unless I’m using bathing suits wrong.

Like, am I the only woman who can make it to and from the beach without taking any part of my bathing suit off? I usually leave my bottoms on the whole time I’m swimming, but it seems like that may be all wrong. 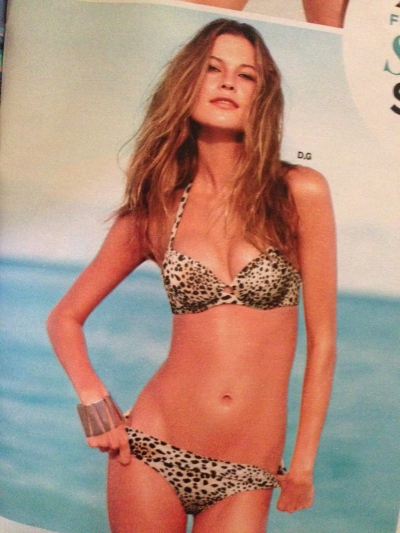 I’m just gonna take these off for maximum sand in my crotch. 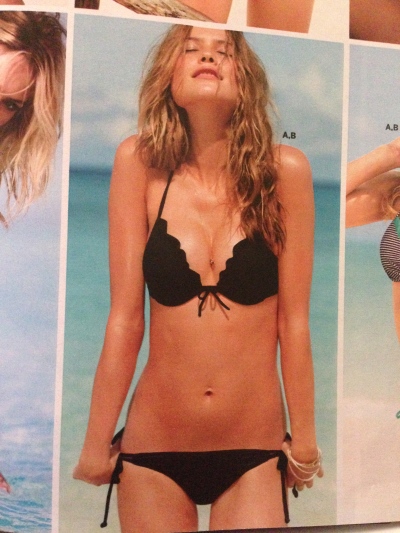 You know how sometimes at the beach you have a spontaneous orgasm while slipping your bottoms off? Me too.

For the record, if I ever pick you up to go to yoga and you answer the door like this, don’t ever speak to me again. 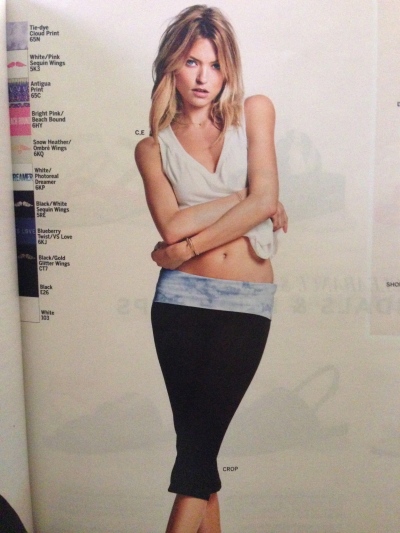 I don’t really feel like going to topless yoga today, so why don’t you go ahead and leave your shirt on.

The women in the catalogue are capable of feeling one of two emotions: ecstasy or rage. 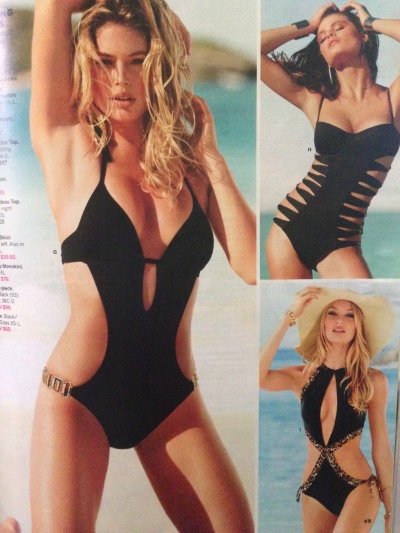 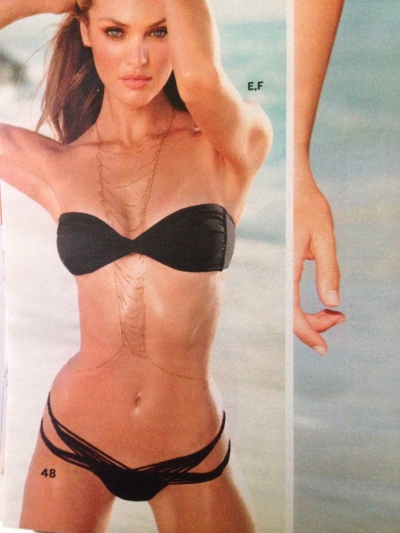 This woman wants to punch you in the teeth. She’s probably just pissed because that is not enough material to adequately cover a vagina. Also, when did the necklace-belt hybrid become a thing?

They start with ecstasy, but then they realize that they’re jutting out their hip so far that they dislocated their pelvis (I made that up but it still sounds terrible) and their joy combusts into anger. 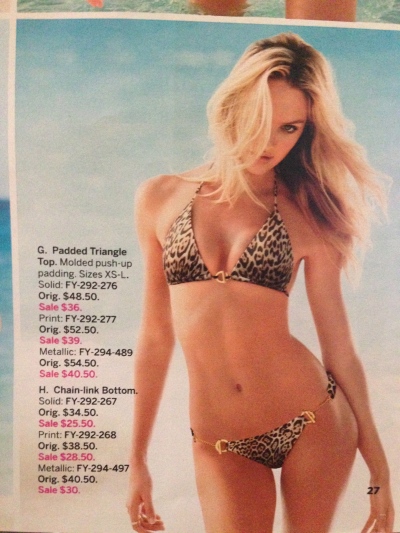 I feel like there’s something slightly off about this photoshop job.

Don’t despair for them, though. Soon enough, the joy returns.

They love eating fruit so much that it sends them into fits of euphoria (but who doesn’t?): 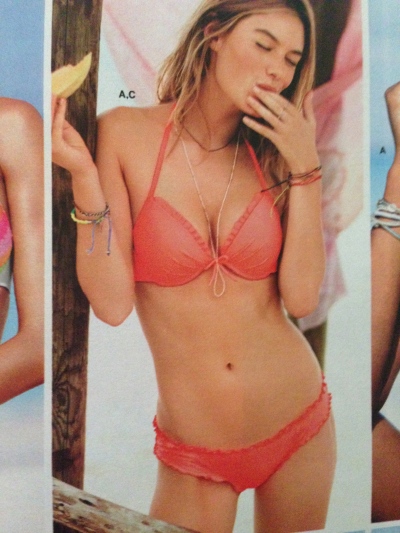 What they don’t love is showing you their face: 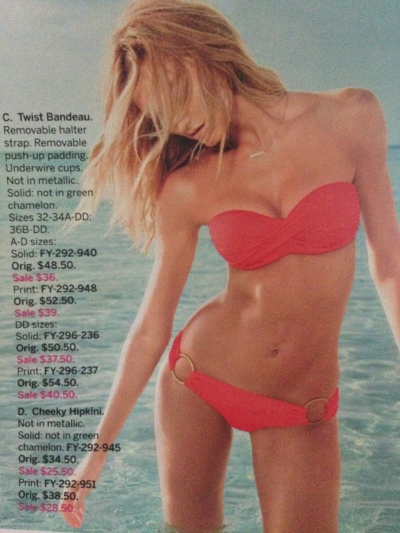 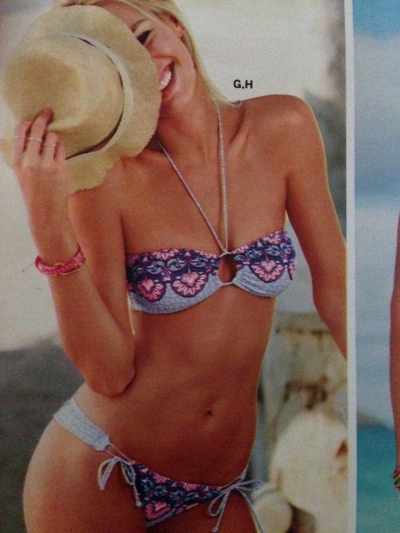 You know how sometimes you’re on the beach playing peek-a-boo with your fedora and it’s so super trendy and adorable? Me too. 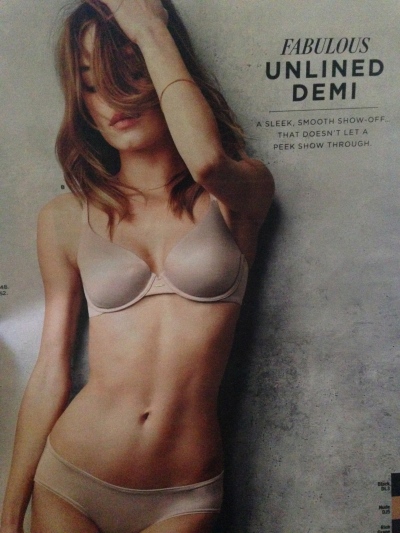 So you brush all your hair in front of your face and then hold it in place with your hand? Fashion GENIUS.

Thanks, Victoria’s Secret, for reminding me that my face isn’t necessary as long as I have a hot body. Sometimes I forget that and actually try to use my face for things like talking or sharing information. Tomorrow, I’ll remember to just put a bag over my head, slap on my bikini (just the top), and hip-jut my way out the door!

Sidenote: If you’re wondering why the photo quality is so poor, it’s because I used my iPhone to take pictures of my actual paper Victoria’s Secret catalogue. There’s probably a way to download the catalogue online or do some fancy computery stuff, but I don’t really know how to use a computer. Reason number 3928 that I shouldn’t have a blog.